The VHDF-Canada annual meeting was held on Sunday, Feb. 9 2020 in Saskatoon at 3 PM. A test is scheduled for September 12-13 near Alvena, SK, sponsored by the Saskatoon Gun Dog Club.

VHDF-Canada Bulletin #1 was mailed to members in February 2020. Please email joe.schmutz@usask.ca if you did not receive your copy.

Photo credits: Most photos were taken by Dale Eslinger and used with permission.

How one hunter could help Wyoming improve its laws

Historically the use of dogs for the recovery of wounded or dead big game had been banned in Western North America. Doing a quick search I have discovered that in the Western US it is allowed only in Utah, Idaho, Montana, South Dakota, and now Wyoming. Three western states outright outlaw it in their rules and regulations (Washington, Oregon, and Nevada). Luckily for game and hunters, many U.S. states and Ontario and Quebec have changed their laws/regulations.

Idaho allowed the use of dogs in 2010. North Dakota has a bill to legalize blood tracking currently in their legislature and I have heard of effort to legalize it in Saskatchewan and Alberta. In British Columbia, it is legal to hunt big game with dogs as long as they are leashed. Manitoba regulations state that: "Dogs may not be used for any purpose connected with big game hunting". One thing I have learned from researching this is that hunting regulations are extremely difficult to navigate!

When I moved back to my home state of Wyoming, I knew that it was explicitly prohibited. Having seen it legalized in Utah only a couple of years earlier, I thought it might be a challenge worth tackling. Early last year I had reconnected with an old friend from High School who has been a Member of the State House of Representatives from Green River, Wyoming, for quite some time. While we are on different sides of the political spectrum we are not separated by a wide chasm, more like a narrow river.

Every state, and I assume every province, has a different method of dealing with their game laws. On May 23, 2018 I sent the following message to my friend: “Stan are you up for a challenge? I was informed by Wyoming Game and Fish that the use of blood tracking dogs to find and recover killed and wounded big game is prohibited by state statute and can only be changed by the legislature. We are expected to do everything in our power to recover big game but are prevented from using the best tool we have available. Other western states have come around, it’s time Wyoming did as well. I can provide you with more info if you are interested.” His response was, “I would be willing to look into that if I am re-elected. Send me more information.” Luckily he was re-elected!

In July I ran across Stan at a class reunion and we were able to discuss this in more detail. I provided him a copy of the Utah law to work from. At the time the Wyoming law read, “PROHIBITED ACTS. IT IS ILLEGAL TO: Use any dog to hunt, run or harass any big or trophy game animal, protected animal or furbearing animal except as otherwise provided by statute. The Commission shall regulate the use of dogs to take mountain lions and bobcats during hunting or trapping seasons.” While the Utah law reads, “A person may not use the aid of a dog to take, chase, harm or harass big game. The use of one blood-trailing dog controlled by leash during lawful hunting hours within 72 hours of shooting a big game animal is allowed to track wounded animals and aid in recovery.”

The Wyoming Legislature is in session during the months of January and February and it appears to be a busy time for them. On November 7th I received a message from Stan indicating he was starting to look for co-sponsors for the bill. On December 4th I received a copy of the draft bill from Stan, it was essentially a verbatim copy of the Utah law. On December 16th Stan notified me he had taken the bill to the head of the Wyoming Game and Fish for review. His only issue with the bill was the 72 hours. He indicated that by then the meat would be totally spoiled and from that perspective Stan felt we had a better chance of getting it through with a 36 hour window and I saw no reason to argue with that. The Wyoming Outfitters have a powerful voice at the state legislature so if they want to get that extended for their trophy hunters they are more than welcome to try.

The next message arrived from Stan on January 15th indicating that on the next morning the bill, HB073, would be going before the Travel, Recreation and Wildlife Committee. On February 15th I was notified that the Bill had passed both sides of the legislature and was signed by both the Senate President and the Speaker of the House. It was sent to the Governor who signed it on February 19, 2019 at 2 PM Mountain Standard Time. To be honest, I had little hope that it would pass but I have always lived by the motto of “Make them tell you no, don’t assume they will”.

This coming spring and summer will be spent training Bear Hills’ Ember and Eagle Rock’s Alpine in the fine art of blood tracking. We are doing our part to include a little more versatility in our versatile hunting dogs. I hope to make our team available to local hunters and outfitters if they are in need of help finding their animals. Maybe next year I will be able to tell you how successful we have been.

VHDF Testing at a Glance

Hunters make diverse demands of their dogs, especially those hunters pursuing upland birds, waterfowl and possibly big game. Such a wide range of uses is possible because versatile dogs have been selected for a greater range of behavioural responses than any other type of dog. VHDF tests have been designed as a tool to help breeders maintain this exemplary range of performance in their breed.

Some of the VHDF tested traits can be greatly affected by training (e.g. obedience) while others are more purely ability and also more highly heritable (e.g. use of nose). In keeping with a service orientation for breeders, VHDF tests focus heavily on ability and less so on trained responses. For example, there is no obedience judged in the Hunting Aptitude Evaluation (HAE) for young dogs, a moderate amount in the Advanced Hunting Aptitude Evaluation (AHAE; e.g. steadiness), and most in the Performance Evaluation (PE). In the PE test, an experienced dog is expected to function as an integral member of the hunting team in all aspects of bird hunting.

The table above offers a quick overview of the tasks and abilities evaluated in each test. Note that scores in the green and yellow shaded portions of the chart are doubled in the final score to give more weight to these "ability" subjects compared to the largely trained subjects shown in blue.

More detailed information about VHDF-Canada Field Tests and past scores is available on a separate webpage.

Since the beginning of VHDF in 2007, there has been an annual fall test in Saskatchewan, north of Saskatoon. In 2010, there was also a one day puppy test in June.

The test results since 2007 are available as a pdf downloadable document.

Most dogs used for field tests are purebred dogs of one of the versatile breeds such as Brittany Spaniel, German Shorthair, German Wirehair, Griffon, Large Munsterlander, Pudelpointer, Viszla, etc. However dogs used for blood tracking can be of any breed or cross.

See How to Join or Renew Membership for more information.

Judges approved by the VHDF-U.S. organization are authorized to judge in any VHDF-Canada field test.

Blood Tracking Judges will undergo a separate approval process. Some may be authorized to judge only this test. As of January, 2019 these judges include: Brent Grabowski, Saskatoon; Matt Walpole, Saskatoon; Joe Schmutz, Saskatoon. 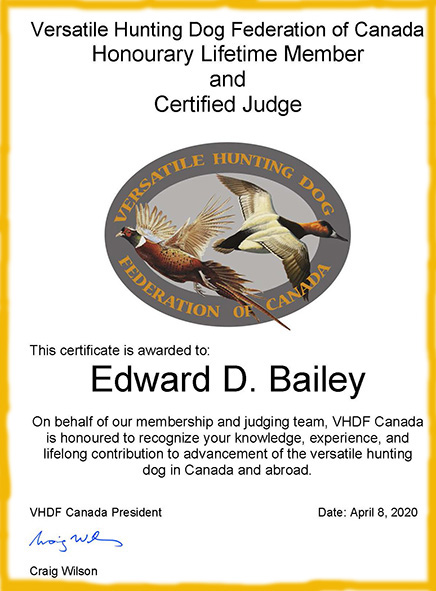 For more information on VHDF tests held in Canada from 2007-2018, visit VHDF Tests in Saskatchewan